Climate march – we did it, and it was awesome 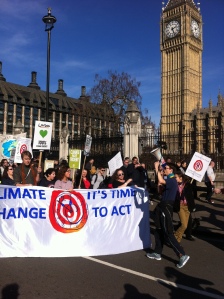 So we did it! And it was unforgettable.

“As throngs of protestors descended upon London’s Parliament Square, a man dressed in a mock police hat and yellow safety jacket shouted through a loudspeaker: “Whose Planet?”

“Our planet,” the crowd roared back.

Marching in the front row as one of lead stewards – which meant leading these 20,000 people from beautiful Lincoln Inn Fields to Parliament Square – I felt calm, peaceful and happy (and I am careful not to overuse this adjective).

The day started off with me driving a van (for the first time in my life) full of placards, banners and electronic equipment to the venue. Then one last steward briefing for leads stewards, a bit of meditation, a bit of running around and asking various individuals for their next action (as this is time to ACT, not time to march and go home), a few jokes with policemen on bikes joining our bike bloc, and off we went.

You can read the whole report here and watch a short video here.

It was emotional; full of positive vibe and happiness; peaceful; accompanied by lots of music, dancing and pretty funny chanting, and lots of cheerful and smiling passers-by on the Strand, in the warm sunshine. Having been involved in helping to organise the event, I was aware how many things could have gone wrong despite the most detailed preparation. But everything went according to plan: the weather, the people, the speakers and the sound were perfect.

There was only one thing to say at the end of the day while raising a glass of prosecco with Lindsay, the main organiser and one of the most inspiring women I have met: we did it. And it was just awesome. 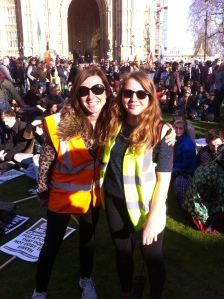 I am a sustainable tourism specialist on the Caucasus region. I have been going back and forth to Georgia since 2001 as a traveller, tourism development professional and academic researcher. Now working as a Sustainable Tourism Expert for the World Bank and GIZ projects in Georgia on DMOs, regional and national marketing, and mountain tourism development. More on my blog: oneplanetblog.com and tweet @oneplanetblog
View all posts by martas2912 →
This entry was posted in Uncategorized and tagged #climateaction, #climatechange, c,limate change, fossil fuel. Bookmark the permalink.