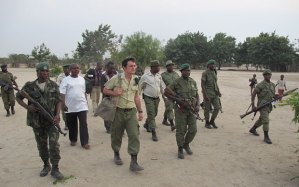 Armed rangers escort Virunga’s director Emmanuel de Merode into the village of Nyakakoma on the shore of Lake Edward. Photo credit to Martin Fletcher, The Telegraph

Today is the world release of Virunga. Do everything you can to watch this powerful film. You can watch a trailer here.

“In the forested depths of eastern Congo lies Virunga National Park, one of the most bio-diverse places in the world and home to the last of the mountain gorillas. Here, an embattled team of park rangers that includes an ex-child soldier and a Belgian prince, risk their lives to protect this UNESCO World Heritage Site from armed rebels, poachers, and even corporations trying to wrest control of Congo’s rich natural resources.”

I went to see Virunga at a special London screening earlier this week, expecting a film about Virunga’s park rangers’ challenging task of caring for the mountain gorillas, in the harsh realities of life in the Congo.

I didn’t expect undercover recordings (for example, of Soco International supporters boasting about being paid “compensations” for their support for Soco’s oil exploration in Virunga), nor firsthand footage from the war zone (of the M23 rebel group entering the area amongst gunshots, chaos and panic, shot by a young French journalist fleeing with the horrified civilians). But the mountain gorillas are there too – many funny but also very touching bits – orphaned in a massacre of nine adult gorillas carried out by people who, as one of the rangers put it, “think that if there are no gorillas, there won’t be any reason to protect the park.”

The park rangers’ efforts to protect Virunga have made them plenty of enemies (Virunga’s Director, the inspiring Emmaunel de Merode who opposed Soco’s actions in the park, was shot and badly wounded in April 2014): various rebel groups still inhabiting the park; the poachers who have killed thousands of its elephants and hippopotamuses; and those who cut down its forests for charcoal. And then there is Soco International that has a licence for oil exploration in a big chunk of Virunga.

I will write more about the controversy around Soco’s explorations in Virunga (UNESCO World Heritage site) in a separate post. Now I would just like to encourage you to watch this moving story of bravery and dedication, and take action to help protect this heritage site. Verunga’s producers are asking to spread the word about the park and the film. This is how you can get involved. You can also add your name to the WWF’s campaign to Draw the Line campaign for oil companies to stay out of Virunga and for the DRC government to cancel all permits.

Sustainable tourism specialist with communications, marketing and stakeholder engagement background, specialising in sustainable destination management and Protected Areas (PA) tourism. Advised and provided training on responsible tourism development for several international organizations in the Caucasus, the Western Balkans and Eastern Europe. Speaker and trainer. Mentor and an Associate Staff member at Leeds Beckett University for the MSc in Responsible Tourism Management course, focussing all academic research on mountain and PA tourism in the Caucasus
View all posts by martas2912 →
This entry was posted in Uncategorized and tagged #Virunga, #virungamovie, natural resources, sustainable development, wildlife populations. Bookmark the permalink.